Apparently Loki + Waffles = A Thing (and it’s my fault?)

Well, this was sure a surreal way to top off my time at Worldcon.

I don’t see a point in being coy about the fact that I still write a bit of fanfiction now and then for fun, and lately it’s been Thor/The Avengers fanfic with Loki as the main character because hey, he’s my favorite, and he’s fun to write. I wrote this novella-length thing called The Calculator last year and included a sort of cute side “character” that was the Waffle Iron1.

I had no idea about any of this. Most probably because I don’t have a tumblr3. I knew people thought the little Waffle Iron in The Calculator was cute, but no one even mentioned to me that fanfics spawned from it. I didn’t even realize that people had actually, you know, read the story to that extent.

I’m not upset or anything. I’m just deeply puzzled4. I really wish I’d known this was going on because it’s kind of cool and perhaps not something best left to drop on my head sometime after midnight and my third beer5. 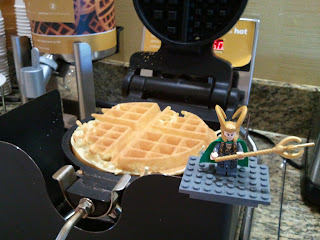 1 – A sort of weird shout-out to The Brave Little Toaster, actually.

3 – I’m not on tumblr because I would rather use the time to write. Twitter sucks away enough of my life. No, I’m not getting an account. Fuck off.

5 – I also kind of want to say hi to the non-porn bits of things, but since I have no tumblr that seems a tad impossible. It does seem cool in some kind of bizarre, WTF-internet kind of way.