The word will break cement.

We reached our hands out to the people who, for some reason, consider us their enemies, and they spat into our open hands. “You are not sincere,” they said to us. Too bad. Do not judge us according to your behavior. We spoke sincerely, as we always do—we said what we thought. We were unbelievably childlike, naïve in our truth, but nonetheless we are not sorry for our words, and this includes our words on that day. And having been maligned, we do not want to malign others in response. We are in desperate circumstances, but we do not despair. We are persecuted, but we have not been abandoned. It is easy to degrade and destroy people who are open, but “When I am weak, then I am strong.”

Listen to our words and not to what [pro-Putin television journalist] Arkady Mamontov says about us. Do not distort and falsify what we say. Allow us to enter into a dialogue, into contact with this country, which is also ours and not only the land of Putin and the Patriarch. Just like Solzhenitsyn, I believe that in the end the word will break cement. Solzhenitsyn wrote: “Thus, the word is more essential than cement. Thus, the word is not a small nothing. In this manner, noble people begin to grow, and their word will break cement.” [Solzhenitsyn, The First Circle]

Katya, Masha and I may be in prison, but I do not consider us defeated. Just as the dissidents were not defeated; although they disappeared into mental institutions and prisons, they pronounced their verdict upon the regime

—Nadezhda Tolokonnikova of Pussy Riot, from her closing statement

I really don’t want to recap the gross injustice done to three of the members of the riot grrrl group Pussy Riot by the courts of Russia. There’s a really thorough and good recap of it at Mother Jones magazine. The short version is that Pussy Riot did an anti-Putin performance at Christ the Savior Cathedral in Moscow; three of the five members present were arrested for hooliganism. They were subsequently jailed for five months, run through a show trial in which they spent most of the time in a glass-sided cage, and then sentenced to two years in prison. 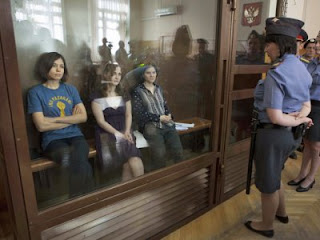 To an American this seems unthinkable, even in our pathetic age of “free speech zones.” Protest has been widespread and international. These women are incredibly brave, principled, and strong in the face of persecution. They’re also intensely thoughtful and articulate. You should read the translations of their closing statements. Read all of them. The words are important.

Then, a panel of experts diagnosed all three defendants with personality disorders based on their “activist” stances, “desire for self-realization,” “overstated self-esteem,” and tendency to voice their opinions.

(From Mother Jones, emphasis mine.)

I can’t help but wonder if this extra, nasty little twist can be credited to the fact that it was women daring to speak their mind. It has a familiar, despicable ring to it. And as Nadezhda points out, it’s common practice for dissidents to have their credibility attacked, to be declared insane, all in an effort to take power from their voices.

What I really want to draw attention to is another thing that Nadezhda said; it has haunted me: Just like Solzhenitsyn, I believe that in the end the word will break cement.

This is the distillation of so much protest. We want to be heard. Because in being heard, we know we will triumph. Perhaps not today, or tomorrow, but words are geological in their nature, and over time they will wear down the tallest mountain. It seems plain that governments like Putin’s understand this. So much governmental energy across the world is devoted to silencing people, because words are powerful. Words are the best and sometimes only weapon that any of us have.

I hope that enough pressure is put on Putin that this travesty is brought to an swift close. But even if not, the words are already out there, and they won’t be forgotten. You can’t stop the signal.

I now have mixed feelings about this trial. On the one hand, we expect a guilty verdict. Compared to the judicial machine, we are nobodies, and we have lost. On the other hand, we have won. The whole world now sees that the criminal case against us has been fabricated. The system cannot conceal the repressive nature of this trial.

—Yekaterina Samutsevich of Pussy Riot, from her closing statement

I am amazed that truth really does triumph over deception. Despite the fact that we are physically here, we are freer than everyone sitting across from us on the side of the prosecution. We can say anything we want and we say everything we want. The prosecution can only say what they are permitted to by political censorship.

—Nadezhda Tolokonnikova of Pussy Riot, from her closing statement

Fear has a way of robbing us of words. That’s how bullies of all sorts operate, intimidating people into silence and eventual non-existence. But this shows the imperative that we must not be afraid, that we must stand and speak. It may be cold comfort, but I too believe that words win in the end. Love and the desire for freedom win in the end.

Words seem soft and simple, but so do the roots of trees.