Being last sucks, I admit it.

Today was the first group ride I’ve done in 2013, a 45 mile roundtrip to Gunbarrel that was relatively flat for Colorado. Which really means fuck you hills, I hate you so very, very much. To say I survived it is probably charitable. 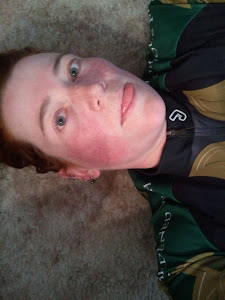 This is me, post-ride on the ugly carpet of my living room. I am probably dead by the time you read this.

I learned several things from the ride today:

1) A no-drop ride does not mean the same thing for every group. Technically, I was not dropped, thank you everyone who put up with my slow ass. But there were times when it was just me and the sweep rider and no one else was in sight because they had outboard motors on their bikes or something. (I managed to average ~15.5 mph over the whole 45 miles, which was in the speed range of 15-17mph the ride organizer told me. The average for the main group was ~18 mph. Yeah.)

2) You can ride when it’s 40 degrees out, and do distance. Your lungs will just rise up and try to choke you when you’re done.

3) Even if you’re the slowpoke, most other cyclists won’t be dicks to you. In fact, everyone was very encouraging.

4) God I hate being in last place. Well, who doesn’t, right? But I’m such a naturally competitive person that it was an extra side of frustration.

However, I think being in last place was also good for me. It meant that I worked my ass off, trying to catch up with the others or maintain a reasonable speed. That’s why I like group rides anyway – I have a tendency to challenge myself more in them. When I’m riding by myself, I’ll put in the miles (I did a 30 mile ride on Monday, for example, all by my lonesome) but I tend to just cruise along, listen to my audiobook, and not really work it.

So this was good for me. Very good for me. It gives me incentive to do more rides and work harder, so I’m not in last place any more. If I keep repeating that, maybe my quads will stop their shrill, pathetic screams.

And by the way. You, Hill on 95th between Kestrel and Phillips. You may think you’ve won this time. But you have no idea who you’re fucking with. I’ll be back.