Finally got to watch this, and not a moment to soon! Darn field work for standing between me and Shakespeare anyway. It’s okay, baby, I’m here for you now. I’ll never let them tear us apart again.

Henry IV Part 2 starts off with scene 1 and 2 being intercut again, as it was in Part 1. This, I like less than I did. It made more sense in Part 1 so we could understand a bit better why Henry IV is having such problems with his son. In this, it’s making Falstaff being, well, Falstaff with what is the setup for the political conflict for this play, and it seems really unnecessary. They also trimmed a bit off the start of scene 1, including the opening monologue of Rumor. Which is a nice speech that’s fun to read aloud, but its loss doesn’t bother me so much, particularly since we only see Rumor once. (It did give me a moment of concern about Chorus in Henry V, but considering John Hurt is on the cast list in that role, I think we’re safe.)

Anyway, little tweaks (and they did exist here and there, probably many more than I realized since I don’t know this play nearly as well as Henry V) like this are normally necessary. I just mentioned the first one because it struck me rather wrongly.

And while I sound like I’m complaining, the only other potential complaint I’ve got is that for some reason the score felt very intrusive in this one, far more than in the previous two plays. I already felt incredibly moved by  Hal’s final scene with his father; I didn’t need all the strings to tell me I ought to be. The music for the coronation scene also made me cringe slightly; I half expected the classic record scratch news when Falstaff breaks through the crowd and stops Hal. Oof.

While I already gushed about Jeremy Irons and Tom Hiddleston in Part 1, this performance requires even more glee and sparkles. Jeremy Irons was incredible. There is so much pain and marrow in that performance: all the guilt that Henry feels about his acquisition of the crown, all his conflicts with his son, the weight of the crown bearing down on him, his palpable worries that his death might hand the throne to someone who will never be ready for it. The last moment when he reconciles with his son was beyond beautiful.

And of course, his entire monologue:

…Canst thou, O partial sleep, give thy repose
To the wet sea-boy in an hour so rude,
And in the calmest and most stillest night,
With all appliances and means to boot,
Deny it to a king? Then happy low, lie down!
Uneasy lies the head that wears a crown.

The delivery was wonderful. Though there was part of me that found it disturbingly cute to see Henry wandering around in his pajamas.

I feel as if Tom Hiddleston’s performance in Part 1 was really just the teaser for this. Hal lets go of his wild days and finally grows up, when it’s almost too late. It comes back to act iv scene 4, when Henry IV is on his death bed. Hiddleston does an amazing job of taking us through Hal’s grief. It’s that realization that’s unfortunately common to so many of us, that we spurned and insufficiently loved those closest and dearest to us because we thought they would always be there tomorrow.

…And dead almost, my liege, to think you were,
I spake unto this crown as having sense,
And thus upbraided it: ‘The care on thee depending
Hath fed upon the body of my father;
Therefore, thou best of gold art worst of gold:
Other, less fine in carat, is more precious,
Preserving life in medicine potable;
But thou, most fine, most honour’d: most renown’d,
Hast eat thy bearer up.’

The words are powerful enough on their own. The delivery killed. I cried. Not ashamed to admit it in the slightest. 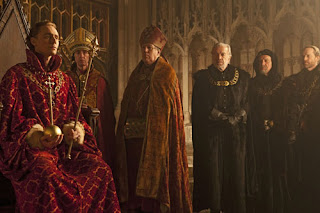 Though if I thought that was the best, then there was the final scene, where the newly crowned King Henry V officially turns his back on Falstaff and the life he once knew. I always thought, “I know thee not, old man,” would be the most powerful line. But in this rendition, I found:

I have long dream’d of such a kind of man,
So surfeit-swell’d, so old and so profane;
But, being awaked, I do despise my dream.

Ouch, ouch, ouch. The more subtle expressions from Hiddleston (showing this isn’t all that easy for Henry) and the stunned disbelief from Simon Russell Beale as Falstaff just sells this. Of course, a lot of the play focuses on Falstaff being old and his impending death – paralleling the mortality of Henry IV, the father that Hal ultimately chooses. Falstaff and Hal are only in two scenes together; I think even in the first one, there’s a sense of Hal already distancing himself from Falstaff, continuing the process that started in the previous play.

Beale makes Falstaff complex through the end. I was never quite certain if the majority of Falstaff’s upset at the end was because he lost someone he actually cared about, or if he saw his long-cultivated meal ticket walk away without so much as a backward glance. That I’m still not sure reflects incredibly well on the performance, I think.

Also, a shout-out to Alun Armstrong as Northumberland. While the political setting of the play is very much overshadowed by the family drama aspect of it, he turned in a good performance at the grieving father of Henry Percy.

This was excellent, and I recommend it heartily, though you should watch Part 1 of the play first so you can get the full arc of Hal’s character development. It’s definitely worth the time investment.

I watched this and Part 1 on the BBC2 iPlayer with the use of a little program called Expat Shield. If you don’t want to go that route, there’s the whole episode on youtube as of this writing. There’s also an upload of Part 1 on  youtube, but it’s cut into 15 minute sections. You can watch it via playlist here.

Henry V tomorrow. My favorite Shakespeare play ever. I can’t even. I can’t begin to say how excited I am.