Shame on you, Rep. McNulty

Well, I got absolutely nothing done after trivia tonight. Rather, I spent the last 100 minutes watching the #coleg tag on Twitter with a growing sense of horror.

It was already a shit night, thanks to voters in North Carolina.

But somehow, the disaster in the Colorado legislature is even worse than that. We had a civil unions bill. There were enough votes for it to pass, because a few Republicans were willing to cross the aisle. But in a move of supreme, mean-spirited cowardice the rest of the Republicans stopped the bill from even going to vote. Representative McNulty deserves extra shame. As Speaker of the House, this anti-democratic move hangs squarely on him.

Apparently when the announcement was made that the civil unions bill was dead – as well as more than thirty pieces of legislation waiting in line behind it – the gallery in the House erupted with chants of “Shame on you!”

Shame indeed. The civil unions bill should have passed. It wasn’t perfect, but it was a step in the right direction. And there were a lot of other things that needed a vote, which are dead now as well. All because the group of Republicans in the state house in Colorado couldn’t face losing fair and square on a vote.

I’m beyond angry and frustrated. I’m tired. I’m tired of the selfish, judgmental bullshit that rules the petty fearmongers who continually attack my lgbt brothers and sisters. I’m tired of assholes claiming that they’re protecting my marriage because by dumb luck I met a man I loved enough to marry before I met a woman I loved enough to marry. I’m tired of people being so blinded by their own smug self-righteousness that they can’t seem to understand that life is damn short, and damn lonely, and if you love someone good for you and it’s no one else’s goddamn business.

I do my best to have faith in humanity. I have faith that fear and hatred will not always rule us. No matter how tired I feel, I will never be so tired I’ll stop fighting. Next year and the year after, no matter how long it takes, I know we’ll all keep fighting. This isn’t over. 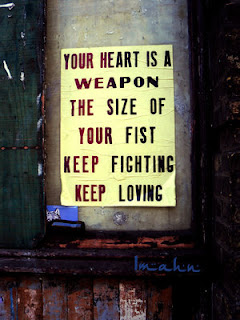