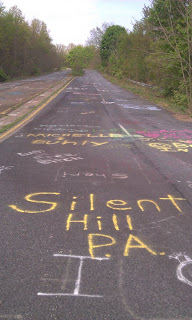 It’s May 3, 2012. Ten hours to go until the US premiere of Avengers and I’m in central Pennsylvania with a group of friends specifically to see that movie. How to pass the time?

Well, the native of Pennsylvania (my dear friend Rynn) mentions that we’re maybe an hour away from Centralia.

If you’re not a fan of horror videogames or somewhat obscure but recent east coast history, Centralia probably doesn’t ring any bells. It’s the town that was devastated by an underground coal fire. It’s a haunting place where white smoke stinking of sulfur billows from the ground itself and the roads collapse as the fire continues to eat its way through the coal veins. Trees in the area are bleached and blasted by the fumes.

Centralia was the inspiration for the fictional town of Silent Hill, which spawned a successful franchise of survival horror videogames as well as a somewhat less impressive movie. In the original game (Silent Hill) and the movie, it was clear that the billowing white fog engulfing the town was actually smoke and ash from the underground fires. In later games, the fog was left to be more traditional water vapor and the mining town history fell by the wayside.

Needless to say, as a fan of the games, I leap at the chance to see Centralia.

If you’re expecting someplace as haunting and creepy as the video game setting, I can’t guarantee that Centralia will deliver. On the day we go, the fires aren’t burning with particular ferocity – the air is almost entirely clear. It’s sunny and more than a little muggy, the surrounding hills bursting with plant life in a way I’m still not used to as a resident of Colorado. But the trip is perhaps more interesting because it’s nothing like what I expect.

There are two halves to a look at Centralia. There’s the town itself – or what’s left of it – and a closed-off portion of road that used to be part of Route 61. 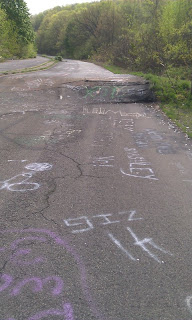 The actual Route 61 now circumvents this section, swinging wide between two hills to avoid the slowly extending fire damage that undermines the landscape. But if you follow the road north out of Ashland, you’ll come to a cemetery at the top of a hill before you hit the next town. Park nearby and the old section of Route 61 isn’t hard to find.

It’s utterly deserted, but you can still hear the sounds of traffic from the nearby reroute. The road itself is covered with graffiti. Apparently when you’re a teenager in rural central Pennsylvania, this is what you do for a good time on a Friday night. Most of the graffiti is penis-based, or names and dates from visitors. There are a disturbing number of swastikas that have been drawn on the asphalt. And here and there are nerd shout-outs to the other reason people come here, the one that doesn’t involve drinking and drawing cartoonish genitalia – Welcome to Silent Hill, PA and There was a hole here. Now it’s gone. The road surface buckles, wavers, and cracks, broken-up graffiti showing that the surface destruction is recent and continuing as the subterranean fires march ever onward. 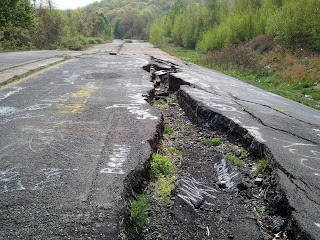 I think in the future, I’m going to have a hard time seeing how clean the roads look in post-apocalyptic future visions. Because if there is even one remaining teenager in the world, and one remaining can of spray paint, it seems almost inevitable that things will end up covered in dicks.

Getting into the remains of the town itself requires backtracking and going around the side of the hill. Rynn’s GPS unit still shows the ghost of streets that no longer exist. At the base of the hill, a few houses still stand, and are obviously occupied. The rest are empty lots surrounded by low stone walls, showing where houses once existed.

Further up the hill, the destruction of Centralia is total, and largely man-made. If the streets were ever paved, they aren’t any more. It’s dirt and gray gravel now, slices of thinly-laminated black shale showing through where runoff has carried away the surface soil. The black shale crawls with tiny, bright pink mites that look like they should belong to a 1980s Atari game.

There were obviously once houses up and down this hill, but nothing remains, just flattened lots that have plainly been bulldozed. 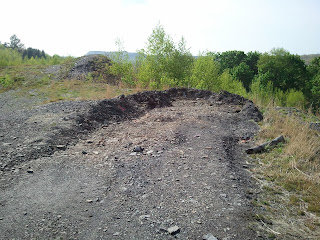 Broken up bricks and concrete are still visible, the remains of walls and foundations that haven’t been completely removed. The ground is littered with broken glass and shotgun shells; I guess since unpaved tracks don’t provide the same graffiti opportunities, this part of the disaster is used as a shooting range. Strange little bits of civilization still peep out of the surrounding trees, like this wooden utility pole. 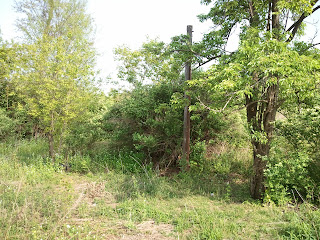 This is where it finally begins to feel eerie, seeing these ghostly remains of what was once a town. There are a lot of reasons for the government to have seen to the destruction of the unoccupied houses. With toxic fumes rising from the ground, allowing abandoned buildings to stand and invite squatters is a potentially lethal proposition. They’d be fire hazards. And it’s a way to discourage gawkers like myself from picking over the bones of Centralia.

But all the same, it’s disquieting to see there was once life and it has been so plainly removed. 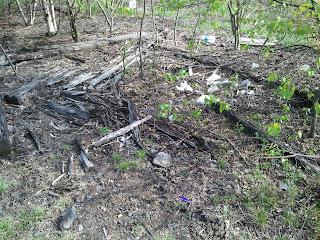 And even on this clear, beautiful day, there is a reminder of the fires that still rage through the coal seams. Smoke isn’t billowing, but the air smells faintly and pervasively of sulfur. There are holes in the ground from which wispy smoke drifts. Like a ghost, it doesn’t photograph, but it’s there to see with your own eyes. 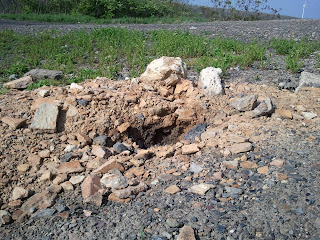 Seeing smoke come out of the ground is something that disturbs a deep, primal portion of your brain. The smoke stinks like matches, and you know that’s bad and you really should just get the hell away. Even worse, when the breeze shifts and the smoke washes over you, it’s notably hotter than the muggy air. You feel it like breath on your face.

And you let yourself imagine that this might just be a little hint of hell. Because an endlessly burning, unquenchable fire that burns slowly underground, eatings its way through the bones of old trees certainly fits the bill. In that moment, sunny day or no, you’re still waiting to hear the old air-raid sirens.

There’s something else you can see from the ruins of Centralia, which sums up so much of the way the region feels to an outsider like myself. 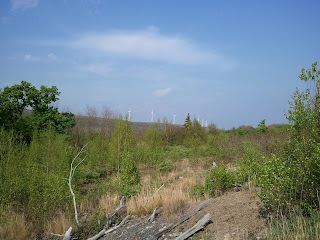 Throughout the region, there are enormous, flat topped tailings piles, the remains of open-pit mines where machinery has chewed up all the coal and spat out the pieces we didn’t want to burn. They are ugly sores on the landscape, though you do see places where plants have begun to move back in. From Centralia, standing in the bulldozed shadow of a house, you can see one of these flat-topped monstrosities lined with the graceful white forms of enormous windmills, blades turning slowly in the breeze.

With the stink of sulfurous coal smoke permeating the air, the windmills really do feel like a distant promise, one that you might be able to reach if you can just stretch your arms far enough.

For a little more about the history of Centralia and its underground fire here is one site.
For the rest of my pictures from Centralia you can look through my online album.