Fitness for Fat Nerds: What Not to Wear

Exercise can be rough enough without feeling uncomfortable while you’re doing it. Particularly when you’re getting started, there are enough distractions from the actual exercise without adding uncomfortable clothes into the mix.

So that’s rule number one: Be comfortable.

You’re not going to do your best if you’re wearing tiny shorts that have dedicated themselves to giving you a wedgie, if you’re dying from heat, if your pants are trying to fall down or trying to squeeze the life out of you. Don’t wear jeans for running. Just don’t. Ladies, get a real sports bra. You’ll thank me.

Corollary to rule number one: Don’t worry about how you look.

The secret is that no one looks good when they’re exercising. Or if they do, I’d hazard a guess that they’re not working as hard as they could be. You’re going to get sweaty and gross. If you’re like me and have the approximate complexion of a ghost, your face is going to glow so bright red you might as well be a tomato. And you know what? That’s fine. You’re not exercising because you’re trying to impress your next hot date. (At least you sure shouldn’t be.) You’re exercising because it’s a thing you do for fun and health, because it makes you feel damn good. You’re doing this for yourself, not to show off for anyone else.

So stop worrying about how you look. Don’t pick your clothes based on sexiness, since no one looks sexy after sweating for half an hour straight. (Also, if you’re someone that wears makeup, I would really recommend you leave that off  when you’re working out, since that just makes it harder to sweat.) Don’t worry about pit stains or soaking your collar down. That’s what effort looks like, baby.

Rule number two: There can be a definite difference between mental and physical comfort, and you need to pick which one is most important.

This is particularly true during the late spring and summer, when it’s going to be hot. Of course, one way to beat the heat is to expose a lot more skin. That’ll see to your physical comfort. However, if you’re in the same fat nerd boat as me, you’re not exactly mentally comfortable with having a lot of your body exposed to the ravages of the Day Star. So you’re going to have to pick – would you rather be cool, or keep yourself better covered?

It’s a personal choice. I tend to split the difference and wear sleeveless things during the summer, since that lets my arms radiate a lot of heat away. But even in the most ridiculous weather, I still wear long pants because I’m simply not comfortable exposing that much skin. And that’s okay. I’ve decided that I’d rather be a little hotter than necessary so that I’m not fighting the constant distraction of my own mental discomfort about wearing shorts. You just have to find out the comfortable balance for you.

Rule number three: Dress for how you’re going to feel for the bulk of your run/ride/etc.


This is something you’re going to have to learn with experience, but how you feel about the temperature outside as you’re starting is nothing like how you’ll feel about it after about five to ten minutes of exercise. This normally ends up meaning that you don’t need to dress nearly as warmly as you think you do, or be prepared to strip layers as you go. But this is something experience will teach you, since it’s a little different for each person.


You don’t have to buy expensive clothes for working out. In fact, please don’t. This is stuff you’re going to sweat, snot, and possibly bleed on. Unless you really get into it (eg: you bike 30 miles a day and want a nice jersey and a pair of good bike shorts) there’s no reason to get fancier than an old t-shirt most of the time. You may need to invest a little bit of money to begin with so you have something to run in other than jeans (trust me, it’s worth shelling out $10 for a pair of el cheapo athletic pants in that case) but don’t go overboard. A lot of the time, the fancy stuff is completely unnecessary, or at the most you may want it if you’re doing your exercise for hours a day, every day. It’s just not worth the investment if you’re exercising casually.

With those rules in mind, I thought I’d show you a couple examples of what I normally wear for exercising, in case that’s helpful. 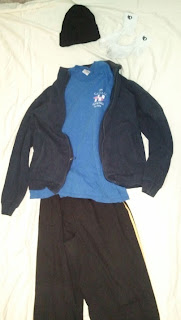 Of this entire outfit, the only piece I bought specifically for running is the zip-up sweatshirt, which I got from a thrift store for $4. I recommend zip-ups for running because you can take them off on the go very easily and then just tie them around your waist. Other than that, it’s an old t-shirt, kung fu pants, and a hat. I don’t normally wear gloves even in the winter unless it’s really windy, because my hands act as my main radiators. Even if I start out cold, about five minutes in I’d be stripping my gloves off so I can get rid of some heat. At that point it’s just easier to tuck my hands in my sleeves for the first five minutes.

Sleeveless shirt that I got on sale for $10. Running pants that I also got on sale for $10. Looks good to me. I also wear the kung fu pants a lot during the summer, but these are nice. You can’t see in the picture, but they’re basically two layers of light fabric with lots of tiny holes in them for air flow. It works surprisingly well. But I acquired both of these fine items at a fancy store you might be familiar with – Target. 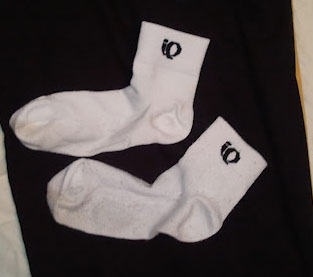 This is one of the few places where I break my own rule about not buying clothes specifically for exercise, or buying the cheapest possible clothes. I love my running socks in ways that are probably illegal in several states. If I try to wear normal socks with my running shoes, I end up in sock-bunching-up Hell, which is not conducive to getting into the zone. I also tend to get socks with a little extra arch support, since that’s something I personally require. Your mileage may vary.

Except for the middle of winter, I always, always wear a bandana. This is because I sweat ridiculous amounts, and it also functions to keep my hair out of my face. They’re cheap and I can’t recommend them enough.