This is a topic that’s caused a lot of digital ink to be spilled on the internet. A lot. I’m not in this to start up an argument. As always, I’m just going to throw out there what works for me and hope you can gain something useful from it.

I will say one thing, though, particularly when the debate hits the shoes versus barefoot issue. I haven’t really seen a convincing argument either way. I haven’t done a pubmed search recently, but when I last did, I wasn’t feeling all that compelled. If you google the topic, there’s also a lot of anecdotes. Athelete A always ran barefoot until an injury happened and then had to wear shoes. Awesome Athlete B wears shoes even when asleep. Person F tried running barefoot and then GOT CANCER AND DIED.

Okay, you probably won’t find all of those. Maybe. But you see where I’m going with this?

Unless you are Athlete A, B, or Person F, these stories don’t necessarily mean anything. Once again, I’m back to my old refrain of you have to find what works for you. Your feet are probably different from mine, and you’ve probably got a different running gait. You probably also have different feet from Athletes A and B, and so on.

If running barefoot works for you, great! If you’re like me and you have to wear fancy running shoes so your knees don’t explode and shower innocent passers by with fragments of cartilage, also great!

You should probably understand where I’m coming from on the shoe issue. I had severe problems with my knees for several years, which come back to the fact that I have very weak arches that collapse. I have to wear shoes with a lot of arch support, and expensive insoles. That change in my footwear, plus a lot of physical therapy fixed my knee problems.

I also have an old weightlifting injury that’s messed up my right hip, which means my right leg gets rotated outward when I walk or run. That has the effect of making me limp depending on how I run. I changed my gait so that I’m now a “forefoot striker,” which means that I run on the balls of my feet and my heels never touch down. That’s actually fixed my limp.

So that’s where I’m coming from.

I would rather shop for shoes than eat ants, but it’s kind of a near thing. I don’t enjoy shopping in general, and when it involves anything I put on my body, it’s even less pleasant.

That said, too bad. I learned the hard way that for me, shoes are important if I don’t want to destroy my joints.

My shoes for kung fu, I just get at normal shoe stores. For running shoes, particularly if you’re just trying to get into it, I really recommend going to a store that actually specializes. What you’re looking for are:
a) Treadmills, preferably with TVs nearby so they can record you run and show it to you.
b) Salespeople that don’t get paid on commission

I think it’s worth being willing to shell out a little more for a pair of good running shoes than your average cross trainers that you just wear around wherever. But point B is important because running shoes can get ridiculously expensive, and if you’re only doing 10 miles a week you’re not going to need some top of the line solid gold shoe that comes with its own mini jetpack. It’s best if the clerk you’re going to work with isn’t going to push you for something more expensive than you need.

I get my running shoes at Boulder Running Company. If you live in Colorado, I recommend them. One thing that impressed me is that the first time I went to their store to buy a pair of shoes, the clerk had me take off my shoes and socks and stand so he could get a look at my feet. It was exactly the same routine I’d gone through with my physical therapist a few months before.

Once you get a pair of shoes to try on, you should get to run on a treadmill, and even run outside. This is important. Shoes feel different between walking and running. Something that feels great to walk in may not be nearly as good for running. It’s even better if they can actually record a video your feet while you run and then play it back in slow motion. This was how I discovered the source of my gait problem with my right leg.

The other reason it’s important to trot around at least a little in a potential pair of shoes is that they should be comfortable out of the box. I think we’re all used to the idea of needing to “break shoes in.” What this really means is that the shoes don’t fit you right. Yes, you don’t want to buy a new pair of shoes and immediately go run a 5k in them, but they should feel good enough out of the box that you could put in a couple of miles and feel good about it.

It’s this search for shoes that are comfortable out of the box that takes the most time. My first pair of decent running shoes took a solid hour of trying pairs on and swapping them around. After that, it gets easier because you can just take your defunct shoes in, brandish the carcass at the clerk, and ask for something similar.

Also, you need to make peace with the fact that you’re going to have to go through the shopping and expense relatively often. With running shoes, it’s not the years, it’s the mileage. Normally the clerk can tell you about how many miles you should expect a shoe to be good for before it starts breaking down. My new ones? About 500 miles. So if I keep up with my current running regimen, they’ll last a little less than a year.

I do have several friends who run barefoot, or run using what are basically foot gloves like these Vibrams since it’s the next best thing to running without shoes and means you’re not going to get cut by broken glass. One of my friends doesn’t even run in those – he just wears them everywhere in place of sneakers. So if that’s of interest to you, explore the possibility.

I would just encourage you to not become too wedded to any single idea until you’ve found what does work for you. Barefoot running might sound great, but if you start having problems with your heels, you may have to reexamine how to make things work. Those nice running shoes you just bought might be putting too much lateral force on your ankles and setting you up for an injury. If your shoes are hurting you, get rid of them.

My Shoes, because I know you totally care

I don’t expect this to be nearly as useful as talking about the art of shoe shopping, but I thought I should throw these in here in case there’s something useful to be gleaned. 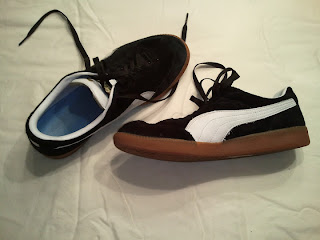 For kung fu, it’s taken me eight years to find a pair of shoes that I actually really like. A lot of guys at my school actually wear Sambas, which I tried out but found the arch to be way too high. The Puma Ligas were perfect for my foot type, and the insole peels out easily so it can be replaced. People at my school also wear normal cross trainers and skater shoes. Almost no one wears “martial arts” shoes. 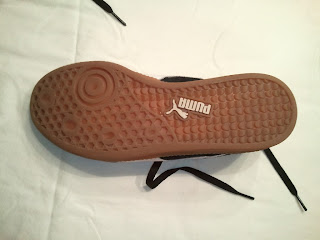 I think the best thing about the Ligas is the sole. I wore cross trainers for a long time in kung fu and particularly when I started getting in to spinning/flying kicks, I noticed the really textured soles made it harder to turn. And when I did turn, I could feel it put more lateral pressure on my knees, which is not a thing I like. Additionally, it started ripping pieces off the soles of my shoes, which made them a lot less comfortable. These have enough texture that they’re not dangerous to walk in, but they feel really nice for martial arts.

Actually, I like Ligas so much at this point that they’re the shoe I wear for my every day life. The only bad thing about them is that the sole is thin and doesn’t have much padding. So when you step on a rock, boy do you feel it. And cold goes through them in nothing flat, so they’re not great for winter wear. 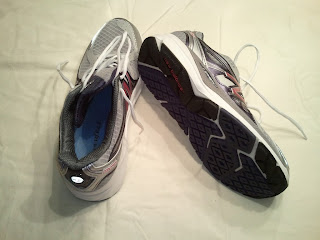 These are the new running shoes I just picked up. I had a pair of New Balance before, and these are the closest equivalent to them. I’m not going to shill for NB as a brand, because everything fits pretty differently. Mostly, you’ll just notice these have some pretty heavy duty support in the forefoot, which is what I needed. This one also has less rigid support on the arch – just a little less – because the wear patterns on my old shoes showed I was getting pushed to the outside a little by that. 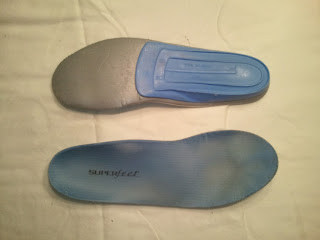 My insoles. I use blue-flavored superfeet because that’s what my physical therapist told me to do, and I would walk over hot coals for that woman. Are they better than any other insoles? No idea. I would say they’re definitely more supportive than the ones that come with shoes. I’d never go back. Do you need them? It depends on you and your feet.

This pair is pretty old – you can tell from the nasty sweat-stained footprint that I’ve driven into the foam. However, they’re still okay to use since the plastic isn’t cracked and I haven’t actually worn through anything yet. Which means they’ve outlasted the pair of shoes they were once in. So even if they are relatively expensive, you don’t have to replace them too often.

Hi, I’m Rachael. I’m a fat nerd. I also run 3-4 miles a day and have done kung fu for eight years. I’m not writing this because I want to be some kind of fitness guru. Hell no, that would be ridiculous. I’m writing this because I’ve got a lot of friends that struggle with the [metaphorical] Fitness Demon and I’m hoping my experience might make things a little easier for them. I’m also writing this because it’s a lot of stuff I wish someone had told me, back when I was making attempt after unsuccessful attempt to get into this exercise thing. If it helps you out, great.