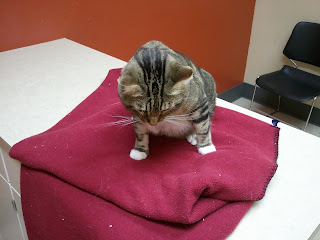 This is not a happy kitty.

The kitties went to the vet today for their annual checkup. Or rather, I took them to the vet, because it’s not like they were just going to hop in the car and drive themselves over there.

Tengu has gotten wise to my normal trick of leaving the carriers out and open, then luring the cats inside at the appropriate time. I ended up having to corner him in my bedroom and stuff him into the carrier. However, Tengu also got a Gold Star from the vet for being in a fine example of a cat his age and in perfect health. It was apparently the only gold star the vet had given out all day.

Loki, on the other hand. Loki. There was screaming and growling and hissing and spitting. There were one or two swipes at the vet, though he didn’t seem to have his claws out for it. They had to try to wrap him in a blanket, he was being so bad. And there was no way in hell he was going to quietly let the vet look at his ears, which he’s still having problems with. So he got a jab in the butt (plus hissing, spitting, and snarling) with some sedatives.

And he fought the sedation the whole time. He’s still fighting it now. This cat will not just go to sleep. I always knew Loki was stubborn, but this is a whole new level of Fuck You I Ain’t Gonna And You Can’t Make Me. At home, Loki is slowly wobbling around like a drunk, and every time he looks like he’s going to fall asleep he gets up and wobbles around some more. I was trying to just keep him in my bedroom to start with, but then he just would not stop trying to get up on the windowsill, even after I had to rescue him because he almost fell off. I think I’ve got him contented with a sunbeam coming through the patio door now. Maybe.

And he keeps glaring at me with this eyes barely open and his nictating membrane at half mast, which is both hilarious and creepy at the same time. It’s a look that promises there will be hell to pay, just as soon as there’s just one of me instead of seven or eight wobbling around his field of view.

However, all of this did have a good purpose. It turns out the ear problems he’s been having for years are because he has ear mites. A weird, asymptomatic case of ear mites. Because the gunk coming out of his ears doesn’t look like ear mite gunk, and he’s never given them to Tengu despite the fact that they’re very contagious and Tengu will not leave his ears alone, yet Loki’s ears are just crawling with mites. Bizarre. And the vet also said ear mites tends to be a young cat thing, and a farm cat thing, so maybe Loki got them before I picked him up (since he was born on a farm if memory serves) and has just had them ever since. Either way, I’ve got a treatment for him, so hopefully that means his ears will clear up and we won’t have to go through this drama with him again.

Hopefully. Next time they go to the vet, it’s for vaccinations, so there may be more of the good drugs in his future.