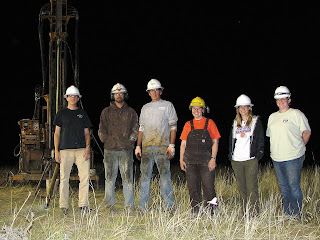 The night shift, from left to right: Gabe, AJ, Brandon, Brady, Bianca, and me

As of right now, drilling is finished! We turned the B-hole (not to be confused with the Gilmore Hill A-hole) over to the day shift with less than fifty feet left to drill, and they got that done in a bit over an hour. So Gilmore Hill is finished, and that was our third and final site! So now it’s just about analyzing what little initial data we have, and biding our time until January, when we all get to meet up in Bremen and do another marathon of SCIENCE!

Will ended up deciding to go deep on the first whole, so on night six that’s what we did. The returns took a lot longer, and we had a lot of down time during the night shift because the drill bit had been worn almost entirely smooth. That required tripping out of the hole and back in, so that was like two hours gone. After that, we drilled at a reasonable pace, but by the end it was taking 20 minutes per core and there were some really clay-rich intervals that took forever (relatively speaking) to drill through. There was still a hundred and some feet left on the first hole when we handed it over to day shift in the morning, and they finished it up.

However, that night we did have some entertainment. Some of it was not so fun, like the part where I got bitten seven times by various mosquitoes. The most exciting part of the night was when a bat flew through the open door of the RV and couldn’t find its way back out. It eventually flew into the cabinets and hid. The poor thing looked so scared. Gabe ended up using a dish towel to grab it, then let the bat go outside. It flew away alright, so hopefully it was fine and caught a lot more bugs that night!

This last shift we started off just waiting for the first hole to get logged, then we moved the rig to the new location, a whole fifteen feet away from the first hole. When we finally did start drilling, it was just gogogo like the first night. Except since we weren’t doing sampling on this second core, it felt a lot less hectic because we effectively had at least one extra set of hands at all times. So even though we were getting core every ten minutes, I think poor Gabe was getting a little bored at times. AJ seemed determined to get through all 200 feet on his own – we’re not sure if this was because Doug spent like half an hour at the start of the shift telling him it just couldn’t be done, or because he and Brandon were just convinced that if they didn’t see the thing through to the end themselves, they’d somehow get suckered in to one more night shift. But in the end, we had to call it good at about 150 feet since the rig needed to be refueled.

But it’s done for sure now! And day shift has to clean up the drilling site HAHAHA. We went and got breakfast, and now I’m going to try to have a short little sleep and be up by around 1 or so. Our plan is to go hang out in Cody for a couple of hours, and then have a big dinner for all the Gilmore Hill crew. This will hopefully help me get back onto normal hours. And then I’ll be heading home early tomorrow morning, so I will be back in Denver before the weekend!