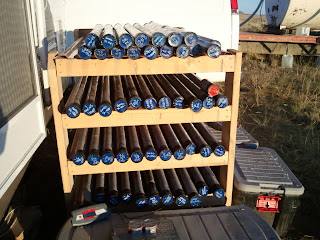 The previous shift was so ridiculously busy that you’ll notice I didn’t even post about it until tonight. Because it was GOGOGOGO and then I sort of fell into bed and passed out for seven hours.

We’re at Gilmore Hill now, which is our third and final site. In good news, it’s a lot less windy than Polecat Bench, which I’m a fan of. And while we no longer have the most scenic portapotty in Wyoming, it’s also not a wobbly hellbooth on the edge of a very steep drop, so I’m counting that as a win too. In more challenging news, we’re on BLM land that’s a preserve for wild mustangs. Which means that we have to keep everything in a 50 by 50 foot pad of land that’s marked by little pink flags. So everything is very cramped together. And BLM has been by to check multiple times to make sure we’re not leaving our box, so trust me, we’re being very good about staying in the allowed area. This means the portapotty is right next to the RV, which could get unpleasant a few days into the project. It also means that the noise from the drill is pretty crazy at times since we’re really close to it.

And the area is also absolutely beautiful. check my Twitter feed for many pictures. The great thing about being on nights (aside from the impossibility of getting a sunburn and the lack of heat) is that we get both the sunrise and the sunset every day, while day shift gets only OMGSOHOT AHAHAHAHA.

Last night, we didn’t really get to enjoy the picturesque location. As soon as AJ and Brandon (our driller and his assistant) were on site, it was gogogo all nigh. Day shift had only drilled for a couple of hours, so we were rocketing through the shallowest part of the hole, with only a short break so AJ could eat a salad for his lunch. We processed well over 200 feet of core last night, which is a new record for the project. Pretty much as soon as we had one core packaged and logged, we’d have another one waiting. As you can see, we literally filled the rack and had to start double stacking.

So yeah, by the time day shift came to relieve us, we were all ready to drop. And unfortunately, Gilmore Hill is further from Greybull than Polecat Bench was from Powell, so we get a bit less sleep due to the longer drive. Plus night shift is borrowing Dr. Gingerich’s old blazer. I get so motion sick in that car when it’s on regular roads, it’s not even funny. So it’s a 40 minute hell drive for me, and on the other end I have about an hour where I just can’t even look at food.

Thankfully, at the rate this project is going, I don’t think I’m going to have too many roundtrips in the Vomit Comet. We already hit the original target for the first hole during the day shift. Will Clyde (the man in charge on this shift) decided to just go as deep as we could, so we’ll keep going like we did on Polecat Bench and drill until we’re out of pipe. That’ll probably finish tonight or tomorrow, and then the second hole is going to be a nice shallow one just so we can try to catch ELMO twice.

ELMO is the thing I’m interested in – it was a smaller carbon excursion during the Eocene, and if we get good data I want to see if I can do some comparative work between it and the PETM in this area. (Of course, this is all pie in the sky and we won’t really know what I’m going to do probably until January when we’re finished in Bremen.) We’ve all been nervous about getting ELMO in the cores here, since this is our chance – but there are some big channel sands in the area. And sands, while cool in their own right, won’t have climate data for us like muds do. So I was very tense last night as we were going down to 150 feet, since Will projected ELMO here is 150-200 feet in depth. And when we started the evening, we were in a big sand. Then around 80 feet deep we started getting muds, and that lasted until below 200 feet. So I think we’re good! It’s pretty exciting.

(Also as a note, ELMO is what we’re at Gilmore Hill for. We’re not going to get the PETM at all here, since drilling to that depth would require a bigger rig and a lot more time in funds, since it’s so deep.)

So that was our day yesterday. This shift is turning out to be much more relaxed already…