It’s much harder to write thinky, feeling-ish scenes instead of action-y ones. Particularly when one of the characters is all, I DON’T HAVE FEELINGS, DAMNIT. I think she’s still bitter because I made her murder her first ever boyfriend when she was a teenager. (I totally had a good reason. I promise.) The exciting part is that I wrote up to the start of the FINAL EPIC BATTLETM and after that, it’s just basically a bit of tying up loose ends and general plot post-mortem. The ending is so close I can just taste it! GO TEAM GO!

She snorted, then gently probed at the back of her head with one hand. Her fingers found stitches, which was story enough for her. “Didn’t work the last two times I tried to do that.”

“You used a lot more blood this time.” He looked down pointedly toward the gun still pressed against his side.

“You should be more careful about how you wake a body up. Some folk get mighty sensitive about it.” 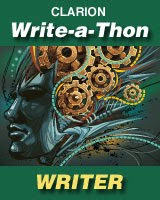