My BBCP: Night 4, Which Wasn’t Hard At All 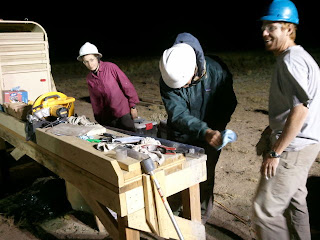 My fears of interrupted and awful sleep yesterday were unfounded it seems. The people at Americas Best Value Inn actually let us check in immediately, at 9 in the morning, and we were all able to get a good night (day) of sleep. Woot!

And then tonight was a short shift, as shifts go. When we got to the site we were down to our last three sections of drill pipe, which basically meant at most an additional 24 feet of core (I think that’s right) could be drilled. So that went fast. I took a little video of the last Polecat Bench core being brought up, so that will hopefully end up on youtube sometime soon. Dr. Gingerich came back to the site after dinner just so he could put the last of the core into the truck, which was cool. The site is totally finished, and now we’re all off for at least another week until we start at Gilmore Hill on August 1. And some of us are done with drilling (everyone on the night shift but me, actually :/ ) and we won’t be gathering up again until we meet in Bremen in January.

After we had the last of the core (which was, I’m sad to say, a fairly unexciting mix of gray sandstone and gray mudstone from the Paleocene, no final red bed for Dr. Gingerich) buttoned down, the rest of the night was all site cleanup. We got everything ready so people can just go up to the Bench in the morning and haul all the trailers out.

It’ll be fun to be the experienced hand at Gilmore Hill. We also have the same drilling crew for that site, so I’ll be seeing AJ again. He seemed a little nervous about it being mostly new people again now that he’s just gotten us trained up, but at least I’ll be there! Until then, I’m just going to try to get all this mud out of my boots…

Also, just a little progress report from Dr. Will Clyde, on the project in general:

Just so you have all the numbers. The 790-footer is the one I was there for most of. :D