It was a busy night, though not as busy as last night. We only did about 25 meters of core, which is a major drop off from last night. This is because the hole is getting deeper, so that means it takes longer to drill, and longer to trip in and out of the hole. 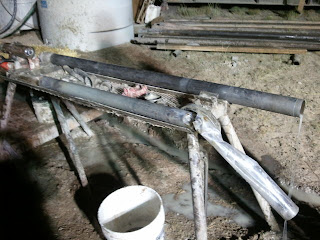 It was also a night where we had a LOT of problems with slipped core. Which was probably partially because of the depth and partially because of the sands and muds we were drilling through. Other than one core that had some red banding in it, it’s been nothing but gray sands and gray-green mudstones. Which makes it really hard to tell where the contacts are through the liner, so that’s been frustrating. We also came across some really neat things in the sands, though – some bits of coal, and we found a fossilized leaf as well, so that was exciting.

The sad news for us night shift people is that it’s been decided we’re going to drill past our intended depth, so we’ll probably have another shift tomorrow night. This wouldn’t be a big deal except no one has a motel room past today, so we’re all having to move to a different motel. In the middle of the day. So that’s going to make sleep rough, which will in turn make work even rougher.

Tonight felt tougher than last night, though, because it was so cold! And windy! And it rained! So we had to race outside around midnight and take all the core on the drying rack and put it in the truck. That was not fun.

But hey, it’s after sunrise, the day crew is here, and it’s time to get some sleep! After Sander makes us a crazy huge bacon and egg breakfast, that is. :)