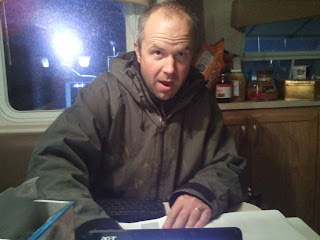 In the very brief breaks between cores, Anders and I have been sitting across from each other in the RV with a slowly diminishing block of cheese between us. Because when you’re working around heavy machinery, it can’t be something classic like whiskey – so cheese is the next best thing when it comes to drowning one’s sorrows.

Seriously, yesterday gave me no idea what I was signing up for. We spent most of the night sitting around while logs were run and the location moved. Tonight has been a different story entirely. We’ve been processing core constantly, outside of the drillers’ midnight break. Aaron actually asked them to please take another 30 minutes off because we’re just running ragged.

We’ve brought up 45 meters of core already, and we’ve still got three hours left before day shift takes over. Now that they’ve started using a polymer additive and bentonite in the drilling mud, they’re even cutting through the mudstones fast. (The sandstones, they cut through crazy fast.) Basically, we’ll finish labeling and describing and whatever else the core. I’ll sit down for about two minutes, look at an e-mail, and then there’s that change in the sound of the rig that says they’re pulling up a core barrel, which takes about 3-4 minutes to run up. Then we do it all over again. And I swear the cores are getting heavier and heavier as we go through the night.

The downside of the polymer and bentonite is that it makes the cores harder to handle. The polymer is extremely slippery, and the bentonite tends to make everything more or less mud colored. The polymer stuff reminds me a lot of the “animal birthing agent” that was featured in the episode of Mythbusters where they try to slip on a banana peel. Now consider how awesome it is to pick up a core liner and have that stuff draining out all over your hands. ICK.

We’ve had a couple of big sand bodies. Normally I like sand, but in this case we want as little sand as possible since the paleosols are going to tell us a lot more about the chemistry and other stuff. Lots of gray mudstones, and then we’ve had some really big bright red paleosols, and a little bit of purple and brown. Some of them have huge (3cm in diameter or more) carbonate nodules in them, which is really exciting.

I’m going to sleep really, really well as soon as I get back to the motel.

(Remember: You can follow my adventures as they happen – if you’re up WAY TOO LATE – on Twitter)