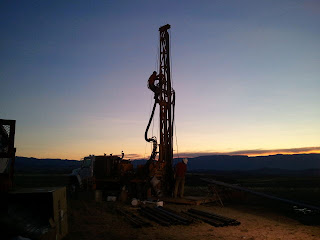 My first evening shift has been uneventful so far. Drilling is way ahead of schedule, and they had about 400 and some feet of core drilled on Polecat Bench when the hole started to collapse. So this meant that this evening has pretty much been dealing with the collapsed hole and then moving the rig over to start on the second hole for the site, which we’re hoping we’ll get a full core out of. We’ll be drilling the second hole with polymer additives instead of just straight water, so that ought to keep things more stable.

The funny part is, all the trouble is coming from poorly cemented sand collapsing into the hole. Which was not something that we were all that worried about in planning – everyone was more focused on the abundance of swelling clays. But it’s not something I find particularly surprising, since we had a similar problem with some gas wells when I worked for Noble. Sand can be a bitch.

So I’ve spent most of the evening hunkered down in the RV on site. It’s pretty windy out on the Bench (because gee, it’s a treeless plateau, in the middle of Wyoming) and there’s not really anything much to do until we start getting core out of the second hole. And now that the rig’s been moved, we have to drill through the cap of Quaternary gravel to get to the good stuff that we actually want. Apparently on the first core, the gravel took something like six hours to get through. We’re hoping that it’ll go a little faster with the additives in the water, but we’ll see. It’s a very real possibility that I’ll go through my first shift without seeing any action at all.

This isn’t a surprise, though… everyone already knew that tonight would be uneventful due to the collapsed hole, etc. I just chose to come out to the Bench anyway because the other option was just puttering around in Powell (which rolls up its sidewalks around 9, I hear) or in the lobby of the motel. I’m sharing a room with my advisor, which is great, but she needs to be sleeping while I’m awake, so I couldn’t very well hang out here. So instead I got to meet the other night shift people. We played a game of Dominion, listened to The Book of Mormon, and did some other silly stuff to entertain ourselves. I wish I had some pictures of our beautiful crew, but most of them aren’t looking too lively right now, and I have a policy against taking picture of people who are asleep.

Four hours left to go until shift end. The motor on the rig is going now, which means they’re drilling slowly through the gravel. We’ll see how far we get before it’s time for the day shift to take over.