I’m Going to Wyoming, for SCIENCE! (and this is why you should care)

In a few short hours, I’ll be on my way to the Bighorn Basin in Wyoming, to participate in the coring portion of the Bighorn Basin Coring Project. Things are moving much faster than expected – the rig is already at Polecat Bench, where it wasn’t planned to be until Friday, because coring went so quickly at the first location, called Basin Substation. 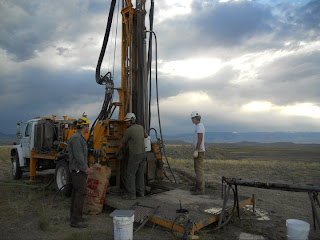 This was kind of a surprise, but a good one. It also means my advisor and I are scrambling to get up to the Basin as soon as we can. And that instead of one two week stretch, I’ll be coming back to Denver with her, and then flying back out to Wyoming on July 31 to help out at the third site. (The third site, Gilmore Hill, is on BLM land and we’re literally not allowed to start until August 1.) 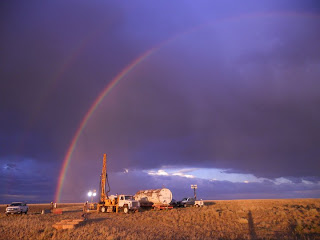 I’ve set up a twitter account for just BBCP-related stuff. I don’t know how many good pictures I’ll get, since I’m on the nightshift, but here’s hoping! Please follow and spread the word. It’s a chance to see some science in action. 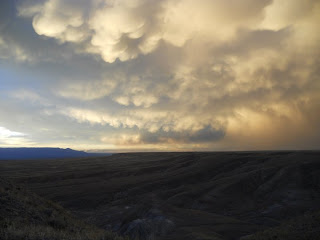 So why should you care about this project? Two words: climate change. In geology, the present is often the key to the past – we can observe processes today and use them to figure out the how and why of ancient rocks. During the PETM, the Earth’s climate changed remarkably, and in a fairly short period of time. I’ve written about it in more detail here, and you can also get more information on the project’s website. While the Bighorn Basin Coring Project is focused on understanding the PETM and many related issues, there is also this to consider:

This will allow us to investigate, in an unprecedented way, the high-frequency climatic and biotic variability of a continental depositional system during greenhouse conditions.

There are no guarantees in science, but there’s a possibility that this time, the past might provide a key to the present. Climate change induced by a rapid influx of greenhouse gases into the atmosphere? While it’s not a perfect parallel (for the PETM it was methane, rather than our own carbon dioxide), it still could be very relevant. And I would think it’s something we want to understand well before our personal contributions of carbon get anywhere close to the rather voluptuous 6800 gigatons of methane that went into the atmosphere during the PETM. (As of 2004 we were at ~500 Gt.)

One thing we’re hoping is that we’ll not only capture the PETM, we’ll also maybe get some data for the other, smaller hyperthermals in the Eocene. How much carbon input equals how much climate change? As part of a species with a vested interest in climate not changing much, that’s a question I’d personally like to examine, and I’m hoping I’ll get my chance.

(And don’t worry, Mom, I’ll watch out for snakes!)