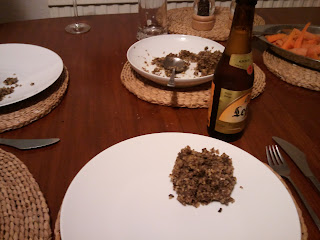 It may not be immediately evident, but that’s haggis, which exploded (with flavor?) from its sheep stomach container whilst cooking. My verdict? Tastes a lot like Bremer knipp, which tastes a lot like scrapple, which is a thing I grew up eating and still like when I’m not thinking too hard about my daily fat intake.

I feel like there was some expectation I’d be appalled by the entire haggis thing when it was given to Mike and I for Christmas. Look, one of the few soups I like is menudo and I grew up eating chicken hearts and gizzards and thinking they were a special treat. (Spoiler: I still do think that, actually. Mmm, hearts and gizzards and dumplings.) I’ll basically try anything once unless it (a) still has the head attached because I have this thing about my food looking at me or (b) is something I’m ethically opposed to such as whale meat. I may think the jelly on top of a pork pie is utterly disgusting, but it’s an informed sort of utterly disgusting since I actually did eat it in order to draw that conclusion. (The only exception I’ve made to this rule is for natto, because I literally can’t get past the smell in order to even get it close to my food hole.)

Haggis is something a lot of American pop culture likes to freak out about since it involves sheep tripe that’s cooked in a sheep stomach. Because I don’t know, it’s un-American to use the less glamorous bits of the animal. Personally, I think a culture that consumes that many hot dogs per capita and invented the Twinkie should probably just shut the hell up and quietly slink away.

So anyway, haggis: solid thumbs up, a good addition to the ground up tripe with beef fat repertoire of scrapple-lovers everywhere.