The Epic of Honda Buying

I will not be melodramatic about this. I’m not going to claim that I’d rather go to the dentist and have a cavity filled than buy a car, because we all know that would be an enormous lie. But it’s a close thing.

I spent the last day and a half trapped in a car dealership, trying to buy a new car. I have noticed that, of all the major purchases I’ve made in my adult life, cars are by far the ones that take the longest and are the most painful. Buying a fricking house didn’t cause this much drama in my life.

I hadn’t actually expected to buy a new car this week. We were planning to start shopping today, actually, and just take our time with it. Our old car was starting to have some serious transmission problems, but I figured we could nurse it along for another couple of weeks without too much difficulty. However, my dad started looking around for cars in advance (I think he was way more excited about shopping for a car than I was, which… well, that’s not hard to do, really) and discovered that right now, trying to find a used Honda in the northern metro area is no easy task. According to the dealer, it’s apparently a combination of the gas prices and a lack of new Hondas coming in from Japan, so the used cars are getting snapped up almost as fast as they’re coming in. So my dad did find two used cars at Go Honda, and I went to look at them on Wednesday. They were both good, so I figured I might as well get Mike to try them out since getting a car earlier than expected wasn’t going to hurt anything.

The drama started when I decided that I wanted to have my mechanic look at the car we wanted before I was willing to throw down the money. Our actual salesman, a guy named Brandon, didn’t seem to have a problem with it, and even joked about putting the car in a remote corner of the lot so no one would see it until I picked it up the next morning. I think he believed me when I said that I’d made an appointment with my mechanic and would be back for sure. But his boss was not so convinced, and the hard sell started.

Seriously, I could just buy the car and then have my mechanic look at it and return it if something was wrong. And it was a Honda certified used car so it was insulting that I didn’t trust that. And they take the three day return policy very seriously. And you know that Hondas are hard to find right now, so someone might just buy it out from under us. And they only had four new Hondas left so what did I think would happen if those got bought – the used ones wouldn’t last long after. (Seriously dude, how many fucking cars do you sell on a Wednesday night?)

It felt like most of the pressure focused right on me, maybe because he sensed that Mike was an impenetrable wall of Britishness that wasn’t going to take any crap. It got to the point that I literally said, “You both have to go. I want to talk to my husband. Leave.” And then as soon as they left, we ran for it.

If I hadn’t really wanted that car, I wouldn’t have come back. It pissed me off that much. I have no idea why this is acceptable behavior to anyone… all I can guess is that it works sometimes. But no wonder buying a car is one of the most horrific purchasing experiences ever.

Anyway, I did go back the next day, and took the car to my mechanic. After having it for several hours, Dale called me back up and asked, “Is this car supposed to be Honda certified used? Because if so, there are some problems…” He found three things on the 150-point checklist that shouldn’t have been checked off – the battery, the brake pads, and the air filters. But he said that if those things got fixed, the car was very worth buying and would last us for years and years.

So, armed with a yellow piece of paper that said the dealership was trying to pull a fast one on us, I went to the dealer, with my dad to watch my back. I plunked the piece of paper down and said I’d love to buy the car, but these things had to be addressed first or no deal.

Our salesman scurried to the back room with the paper, and chaos ensued. Another salesman came out with him and seemed pretty ticked off – he made some pretty unkind comments about our mechanic, then dragged us downstairs so we could look at the car and see for ourselves that Dale was totally lying. I let my dad take the lead, since when it comes to cars, someone could point at a random part and inform me that it’s actually alien technology from Area 51 and I’d be able to do nothing but nod wisely in agreement.

So their mechanic pulled the front wheel off and pointed out the brake pad, saying that it looked fine. My dad asked for a ruler, since he wasn’t just going to take someone’s word for it. Which meant that they had to disassemble the brake and actually pull the pads out so they could measure them with a caliper… and the caliper said that the brake pads were only 4mm thick, which is quite a difference from the 7mm they claimed.

At this point, the sales guy that dragged us down there looked like he’d pooped in his drawers a little. Another mechanic tested the battery and said it was fine, but then I asked him to check the air filter since he was in the engine anyway. The filter was black, and his response was, “Yeah… that’s kind of dirty.”

Score one for my mechanic. Two, actually.

They shooed us back to the showroom then, and made a copy of the paper. The supervisor of the mechanics apparently wanted it so that he could go have a chat with his guys. Possibly with a sock full of pennies in hand, though that’s only speculation.

Despite the fact that I did little but sit in the showroom and feel intensely bored, I was stressed and exhausted by the end. It was like I put in eight hours of work at the damn dealership and then paid them a giant wad of cash at the end of it.

I hate shopping for cars. But look, it’s so shiny! 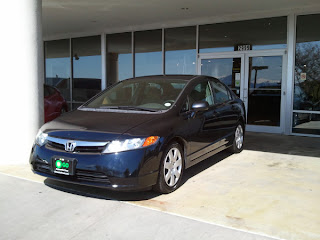 I think the moral of this story is, though, make sure your mechanic looks over a used car before you buy it. And don’t let them push you.