School’s Out All Summer!!!!

So, other than the grading, I had way more fun teaching this semester than I did last semester. Probably because I like sed/strat WAY more than I ever liked mineralogy. Hopefully everyone had a reasonable amount of fun with it. Though the one problem with teaching a class that I really enjoyed when I was an undergrad is that I wanted all of my students to just love it as much as I did… and of course, that’s not going to happen. Some geologists are sedimentary people, some just aren’t.

I’m already working to improve the assignments and materials for next semester, since no matter what I’ll be teaching this lab at least once more. One of the harder things I’m trying to do is develop a grading rubric for one of the major projects, since I think that’ll help me grade, and also help the students figure out exactly what I’ll be expecting from them. I ended up using the rubric for grading this semester, but only as a very fuzzy guideline where I erred on the side of being nice. It seemed to work out mostly, but I’ve got to do some fine-tuning before next spring. Which really means doing it some time this week, before all the motivation gets sucked out of me.

One thing that’s really starting to drive me nuts is just how many points get lost over students just not reading the directions, or not answering the actual question that’s asked, or things like that. And I always feel just a little guilty, taking points off if something is done in pencil instead of pen, but then again, damnit, I said on multiple occasions that it needed to be done on pen.

Though I feel less guilty for deducting points for the assignment being handwritten instead of typed. My eye strain on all the terrible handwriting makes me feel much, much less charitable.

But anyway. That’s pretty much done with teacher stuff for the semester. Grades have been sent off to my advisor, and all that’s left is a bit of cleanup. I think I did pretty well for my first semester on this class – next spring ought to be even better! 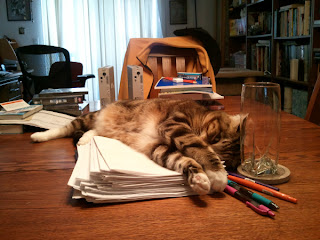 And many thanks to Loki, who helped me in this time of great stress by laying on top of the papers and refusing to be moved.

Also, my friend David seems to have a blog now: Unintelligently Designed, which wins for its name if nothing else.