I haven’t had anything to say about the Sendai earthquake; it has quite literally left me speechless with horror, and pain, and agonizing worry. I know and care about people who live there. I’ve been to Japan twice, myself, and hope to travel there many more times in the future. There is something more personally horrible about knowing a place – if even a little – remembering its sights and sounds and smells, and knowing that something terrible has happened there.

I can’t really focus enough to think about the science behind what has happened. If you’re interested in the details, the USGS is the place to go. Or Chris Rowan has an excellent synthesis of the data at Scientific American.

Garry at Geotripper has tried to put things in a perspective of why the geosciences really are important to each and every one of us, whether we realize it or not. It’s an excellent post. You should read it. The one thing that really stuck with me is:

Many will watch an event like this unfold and try to find some meaning. In one sense, there was no meaning; this was something the Earth does.

There is a quote that I have in my e-mail signature, which I’ve seen attributed to Will Durant – though there’s a good argument that it’s probably an anonymous quote:

Civilization exists by geological consent, subject to change without notice.

The Earth is so very, very old, and so very, very vast. We are tiny, and frail, and even the longest life any one of us can hope to have is less than the blink of an eye in the history of our planet. The Earth does not care about us. We have no special significance. We have only each other. 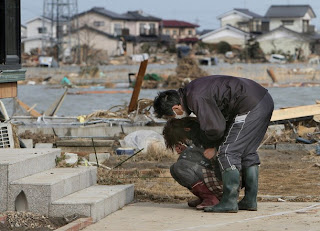 In a way, studying geology has been the most humbling experience of my life. There is not a day that goes by that I am not reminded that our world operates at a scale that we cannot even begin to grasp, and that it did so long before we existed, and will continue on long after the last human is gone.

I’ve seen people – and here I use the term loosely – cheer, as if this is some sort of cosmic vengeance for Japanese misdeeds during World War II. I have seen others try to use this tragedy to justify the self-satisfied little voice in their head that they think is god, but is only actually themselves. First I was angry. Now, I’m just sick. I’m sick that there are people so small-minded and cruel that they take joy in the suffering of others. I’m sick, and worried, and I hurt for my fellow humans who are in so much pain, and so far away.

There is no meaning to the Sendai earthquake. There is no capricious god, no vast karmic wheel. It is simply a thing that has happened, that we as humans must struggle against, and fight to overcome, and mourn those who have died afterward. Because there is nothing more to it – it’s just the summation of physics and time – what we do is so very important. We have only this world, only this life, and only each other. 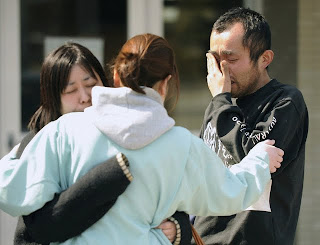 (photo from the Sacramento Bee)