You may recall that back in July, Isaac helped me get a cat out of a tree. I tried to shove the poor, frightened animal into a carrier then, and it escaped. I kept an eye out for the cat after that, and thought I might have seen it a couple of times, but it was always far too wary.

A week ago, the kids that live next door told me there was a cat, hiding under one of the cars in our parking lot. It was the same cat. It was wary, frightened, skittish, but it also wasn’t running away like it had been. I went inside and grabbed a bowl of cat food. Despite the fear, despite the little kids that were trying desperately to help and in reality only getting in the way and scaring the poor thing more, it came out from under the car and started eating. And eating. One of the kids went and got it a bowl of water, and it sucked half the water down.

The cat was the same one Isaac helped me get out of the tree. It was also rail thin, with big awkward feet that would have been white if its fur weren’t so filthy. After it sucked down one bowl of food, the cat let me pet it, and even managed a rusty, uncertain purr and a sad, squeaky little meow. 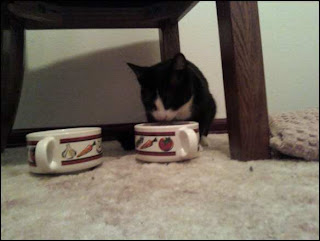 Mike wasn’t that happy when I dragged him outside to see the cat. He’s always been more pragmatic than me. I was all for dragging the little cat into our house right that instant. He pointed out that it might have FIV, or feline leukemia, or fleas, or who knows what else. But he also knew that I wouldn’t be able to sleep, just leaving the little one outside. My next door neighbor was in the same situation; she has two other cats as well, and he husband wouldn’t have been happy to suddenly acquire a third.

So Mike and I made a deal; we’d take the cat to the emergency vet, have it checked out, and then we could keep it overnight in the spare room so I could take it to the shelter the next day.

The cat turned out to be a she, was 6-8 months old, and got a clean bill of health other than being incredibly thin – just six pounds. We sat in the chilly exam room while the vet took the cat to the back room to the quick tests for FIV and leukemia, and I sent a text message to Evan, one of my fellow grad students. He’d mentioned that he wanted a cat. I told him that I’d found one, and the first thing he asked was, “Aw, is she cute?” 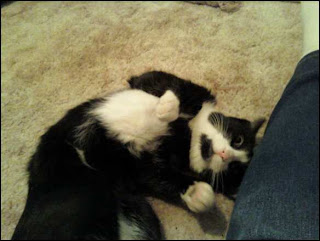 For the last week, she’s been living in my spare room. I’ve spent time with her every morning, and when I come home, and before I go to bed. She has a purr twice as big as her body, and a meow like a rusty gate. I’ve been just calling her Squeaker. She’s sweet and loving, but also skittish; it’s not hard to imagine how hard her life must have been up until now. She loves to be petted, to lean against my leg and purr. She doesn’t know quite how to play right with humans, and gets a little bitey. I’m glad that Evan decided to take her. After just a day, I don’t think I could have taken her to a shelter. But I can let her go to a good home.

Evan’s going to make a good dad for a skinny little cat that needs a lot of love. He decided to name her Shiraz (hopefully I spelled that right). When he loaded her into his car a couple of hours ago, she was wailing and carrying on. It’s hard, not being able to explain to someone that their life is about to get better, so much better. 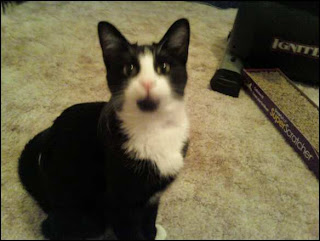 So tonight the cat we dragged out of a tree four months ago went to her forever home. And I’d be lying if I didn’t say I’m already missing her, but the two brats are already much happier without another cat lurking behind a closed door. I’d also be lying if I didn’t admit I was crying, just a little, right now. But I think I’ll get to see her again soon, in her new home.

I don’t think that second chances in life are all that uncommon. They happen all the time, little opportunities to correct mistakes or backtrack on bad decisions. But I also think that the second chance to save a life, even a small, humble life, doesn’t come around all that often.