Thoughts from a future petroleum geologist 4

Maybe some of you are tired of seeing this picture already. 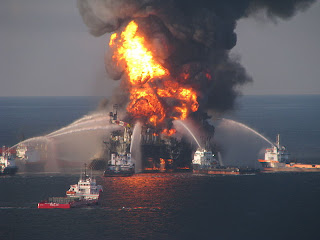 You know what? Tough shit.

I don’t make it a secret that I earn my living from the oil industry, and have done so for the past five years. I also don’t normally make it a giant talking point. It’s quite likely that when I get out of grad school in a couple of years with a Masters’ in geology under my belt, I will return to the industry that set me on this academic course and work as a petroleum geologist.

But that doesn’t mean I have to support everything that my industry does, or the absolutely stupid attitude that this country has toward oil and natural gas.

And it is stupid. Very, very stupid. Unless you’re a believer in abiotic oil1, you have to come to grips with the realization that oil is an extremely limited natural resource. When it’s gone, it’s gone. And unless you’re pandering, lying, or completely ignorant of how the oil business works, you have to understand that drilling more does nothing to diminish America’s oft-cited dependency on “foreign” oil. We’re not a country where oil drilling and production is nationalized. When oil is sucked out of formations in America, it doesn’t go into a giant barrel marked “For Americans only.” While we are a net importer we do export oil. Mostly it’s Alaska and West Coast oil going to countries around the Pacific Rim; but the point is, oil produced in America does not automatically belong to us, the American people. And further, increasing the supply of oil is at best only a temporary solution; it does not decrease the demand, and oil – as I’ve said before – is a limited natural resource.

When I hear any of the slogans – “Drill, baby, drill” or “Drill here, drill now” being the worst offenders – frankly, it makes me want to vomit2. It’s short-sighted, it’s irresponsible, and it displays the sort of willful ignorance and dishonesty that has plagued our country since before the Exxon Valdez disaster. If we’re truly worried about the fact that we import massive amounts of oil, that we are gobbling up a limited resource as quickly as it can be drawn from the ground, the solution is not to drill and speed the depletion. The solution is to reduce the demand, period.

So I bet you’re wondering now why on Earth I’m working for an oil company, and why I’m considering a career as a petroleum geologist, since I’m apparently so anti-oil.

Part of it is financial, and I’m honest enough to admit that. My years in this industry have been the best of my working adult life. My company treats its people incredibly well, and I find the work very intellectually stimulating.

But more importantly, it is because I’m not anti-oil. I’m anti-stupidity and anti-irresponsibility. And those are the two qualities that have marked the handling of the industry and the public’s general reaction to it since… well, ever, I’d say.

I believe that it is the government’s job to step in and make certain that happens with strict regulation, monitoring, and enforcement, because frankly I think it’s stupid to expect people to monitor themselves when they’re in a situation where all profit is private but risk is shared out with the public, willing or no.

But even more important – and I am going to put this in bold, because if you take nothing else away from this post, I want you to remember this – I believe that oil is an amazing and versatile natural resource that could be used to the general benefit of humanity and it is a crime that we are burning it.

Other posts to read:
An Open Letter To Anyone Who Ever Said “Drill, Baby, Drill”
The Power of a Photograph…

1 – Often referred to as “snake oil” or “horse shit” by most geologists I’ve ever encountered – and keep in mind that most of my geologists buddies are card-carrying members of AAPG.

2 – And not just because it’s often being said by Sarah Palin.

4 thoughts on “Thoughts from a future petroleum geologist”