I see you stand like greyhounds in the slips,
Straining upon the start.

This. The Saturday I’ve been waiting for! Favorite play ever, favorite actor ever, go! 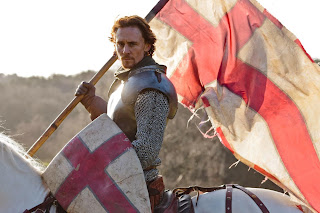 Rather than start this review with seven pages of frantic keysmashing, allow me to just say: Fuck yeah. With bells on.

There was everything to love about the performances turned in for this version of Henry V. Tom Hiddleston was superb. I’ve already gushed and gushed about him as Hal in Henry IV part 1 and part 2. At this point all I can really add is chocolate sprinkles delivered by a magical sparkling unicorn of pure badassery. Which is to say I thought he made a darn good Henry V.

What I noticed most about this Henry V was a pronounced somberness. Hiddleston shows clearly that Henry feels the weight of all his decisions. At the same time, there were lovely moments of supreme temper (such as in Act I scene 2 when he receives the Dauphin’s mocking present) and at the end of the battle of Agincourt with the enraged delivery of:

I was not angry since I came to France
Until this instant.

And then there was the end of the siege of Harfleur:

What is’t to me, when you yourselves are the cause,
If your pure maidens fall into the hand
Of hot and forcing violation?

That is one scary as hell speech, and Hiddleston delivers it with terrifying implacability. (And achieves a wonderfully disbelieving look from Anton Lesser’s Exeter, but more on that later.) I also was pleased that he still preserved the hints of playfulness that live on in the more responsible Henry. When he confronts the soldier who picked a fight with him when he was in disguise, and later tries to woo Katharine, we’re reminded that there’s much more to Henry than a stern and bloody soldier.

There’s just so much complexity to the character, so many tones and notes, and it was all there. Of course, I can’t go on without mentioning the two greatest speeches. I actually watched the “Once more unto the breach” speech three times, since the first time the delivery was so different from what I’d been expecting that   I needed another view. The tone was much less bombastic than what I’m used to seeing, which I think is ultimately for the good. It suited Hiddleston’s take on Henry well. 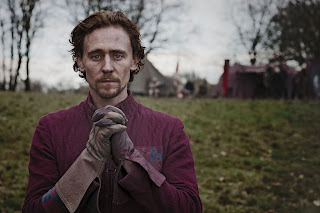 And the Saint Crispin’s day speech. My god. Tears. Perfect.

What really sold Henry’s more scary moments was actually the presence of Anton Lesser as the Duke of Exeter. His reaction to Henry at Harfleur, his confidence in his king, his shock when Henry orders the prisoners to be killed at Agincourt all add up to show even the court didn’t quite understand what they’d get by awakening Henry’s “sleeping sword of war.”

I honestly didn’t feel all that enthused about Lesser as Exeter in Act I scene 2, but by the time we get to Act II scene 4, I was sold:

Dispatch us with all speed, lest that our king
Come here himself to question our delay…

At which point I realized that Exeter is a soft-spoken, fearless badass. I was rather amused in Agincourt as well, when he’s speaking with Henry on the battlefield. Everyone is just coated in blood and mud, and Exeter is clean except for some splashes around his hem. Because he is just too much of a badass for dirt.

Paterson Joesph did very well as the Duke of York, and I was extremely charmed by Melanie Thierry as Katharine. Really, I liked the whole cast, but those are the ones that really stood out to me.

Also, while there was a bit of shaky cam in the battle, I have no objections to it this time. It didn’t make me feel motion sick, and I could actually tell what was going on. I was surprised that there were bits of the battle in slow-motion as well. Overall, I thought it was all right, particularly for a BBC production. Tom Hiddleston, Paterson Joseph, and Owen Teale (hope I’m spelling that right, the credits were kind of blurry) as Captain Fluellen were the ones that really did the heavy lifting on the battle. They all had some serious crazy eyes going.

The acting was good. That’s going to guarantee I’ll be regularly re-watching this when I need a Henry V fix. Some things, I didn’t like so much. The score, for one. I found it intrusive in Henry IV part 2 and even moreso here.

I’m also fairly stunned by just how much they cut from the play. Obviously, this was for time constraints, but it was jarring nonetheless. I actually watched the movie with my pocket Henry V in hand so I could follow along, because I’m just that kind of nerd. It meant that I felt like I was tripping over a rock when something was missing.

Several characters didn’t even make it in, notably Gower, and Henry’s two brothers, Gloucester and Bedford. Which seemed particularly strange to me, since they were present in the two parts of Henry IV. I guess this time around they had something better to do than go murder the shit out of the French with their big brother. Or maybe they just got stuck in the pre-Olympic traffic in London. We’ll never know.

With the loss of Gower as a character, that meant we lost most of the character development scenes with Fluellen, which I think are a shame since Fluellen’s quite fun, and he has an excellent enmity with Pistol that doesn’t get nearly as much play because of the deleted scenes. Act II scene 2, where the traitors are revealed and taken away was eliminated.

Now, I can understand doing away with it for time constraints, but it’s a really good scene for Henry:

The mercy that was quick in us but late,
By your own counsel is suppress’d and kill’d:
You must not dare, for shame, to talk of mercy…

If nothing else, it’s another big point in his development as being so merciless as we see him later.

Also missing is Act V scene 1, where we find out the sad fate of Pistol (his friends are dead, his wife is dead, he’s going back to England to be a thief). While again this isn’t important to Henry, sine we’ve had Pistol throughout the play it does bother me that he’s just left without any kind of conclusion.

Act III scene 7 is also mostly absent, which I was disappointed by. It’s the French camp scene, which always seemed to me to be important setup for the battle at Agincourt – it shows how overconfident the French were, how outgunned the underdog English seemed. That also takes a lot of development away from the French characters, since they really only have a couple of scenes, so seeing them die in the battle later has a lot less impact I think.

I’m also puzzled about the choice to leave out the bit where the French kill all the boys at the English camp and set fire to the baggage. While Henry does order the English to kill their prisoners before that, it’s actually the catalyst for him screaming about how utterly enraged he is. (“I was not angry since I came to France…”) This has the effect of making what was previously Henry’s reiteration to kill the prisoners seem much less justified. So I suppose if the point was to remind us that the man is absolutely brutal when he feels he needs to be, it does do that.

Anyway. I wonder if those scenes are gone entirely, or if maybe some might have been filmed and we’ll get to see them when there’s not the time constraints of television. I guess we’ll find out.

And of course, the inevitable comparison to Kenneth Branagh’s 1989 Henry V. That movie was my first love, so to speak, so it’s not really fair to compare the two. I’ll be watching both movies when I want a Henry fix. I hope they can manage to take turns and not fight, because I do love them both and they have very different qualities.

But I will tell you this. Man, I miss Patrick Doyle’s score for the movie. (And sorry, John Hurt. Derek Jacobi wins. He will always be Chorus in my heart.)

If you want to watch this wonderful Henry V, here’s a recorded livestream, which has something like 10 minutes of sports in front of it. Also a direct download. And you can still watch it on the BBC iPlayer if you get Expat Shield, which is how I did it. (I actually started watching an hour late – shame on me! – because I was out carb loading for tomorrow at a Chinese Buffet.)

As of this writing, by the way, Branagh’s Henry V is available on instant play for Netflix. If you haven’t gotten to watch it, you should. It’s 23 years old but still fantastic.

Henry V is probably the most straightforward of the history plays (less politics, really, more Henry being a shiny badass on a horse) but if you had trouble following it here’s a quick synopsis.