Henry IV part 1 today. Hilariously enough it was delayed by an hour because of Wimbledon. A tennis delay seems like something that would be so much more appropriate to Henry V…

…not that I’m in any way asking for a tennis delay by the time we get to that play. I might implode.

I don’t need to start here with a litany of complaints about the play like I did with Richard II. I loved both parts of Henry IV when I read them – and as with Shakespeare, I expected to like them even better with a proper performance. (Because let’s face it… these works were meant to be viewed, not just read like normal books. Quit torturing those kids in high school.)

Casting was perfect, just as it was for Richard II. Jeremy Irons as Henry IV! Incredible. (Does Jeremy Irons ever get to be king when he hasn’t deposed the rightful monarch first? Just asking.) The man can brood like a champion, and Henry does that a lot in this and the next play – because let’s be honest, he has a lot to brood over! His son is a smarmy, shameful party boy, he’s still torturing himself with guilt over what happened to Richard (as necessary as it was) and he’s dealing with open rebellion that’s only going to cost more lives. Jeremy Irons does a fantastic job of depicting the utter weight that constantly sits on Henry without making him morose.

The best of Irons (and it was all good, so the best was incredible) was when he was playing more as the father rather than the king. He radiates disappointment and despair that he’s ended up with a  poor excuse for a son like Hal instead of Hotspur, who really is depicted as the paragon of all noble qualities – it’s hard not to like him. (And Joe Armstrong does indeed make him both likable and still hotheaded.)

Of course, Irons wouldn’t be in such a good position to be a despairing father if Tom Hiddleston didn’t do such an incredible job playing Hal as an awful little prick. I utterly adore Tom Hiddleston, but by the time Henry actually slaps Hal across the face, I was about ready to cheer for it. Never has a slap been so richly deserved, and it was preceded by a wonderfully insolent look to boot. The beginning of Hal’s evolution from a waste of space to a great king gets a good start, and I can’t wait to see it continue in the next part.

Which then brings us to Simon Russell Beale as Falstaff, because what would Hal without an utterly awful (yet jolly and hilarious) human being to egg him on? Best Falstaff ever, in my opinion. His self-serving interest in Hal is made so clear, though I think there’s genuine affection there as well. The scene between Hal and Falstaff where they take turns pretending to be Henry IV was simultaneously hilarious and uncomfortable; incredibly well done.

Also, Tom Hiddleston’s Jeremy Irons impression made me snort beer through my nose. Damn you, Hiddleston. 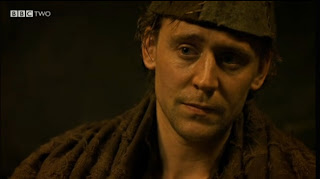 A special shout out to the gentleman who played the Sheriff. I wish I knew his name, but it’s not currently listed on IMDB. When he comes to collect Hal from his den of iniquity, the Sheriff says:

And never has the word noble been delivered with such pointed and censorious air quotes. It was lovely.

So the cast? Excellent. I expect to keep repeating this sentiment for the next two plays as well. (If nothing else, one more play with Jeremy Irons and two with Tom Hiddleston? I am a happy girl.)

This had the same quality on costuming and sets as Richard II to my untrained eye, and I have no complaints there. I wasn’t sure how I felt about scene 1 and 2 of Act 1 being intercut originally, but it grew on me. It did make sense to get people clued in to just who Hal was and why he was proving such a thorn in his father’s side.

Some of the other editing/filming decisions, I liked a little less. There were two major monologues that were delivered as voice overs. One was Hal’s Act 1 scene 2 closing speech:

I know you all, and will awhile uphold
The unyoked humour of your idleness:
Yet herein will I imitate the sun,
Who doth permit the base contagious clouds
To smother up his beauty from the world…

And the other was Falstaff’s Act 5 scene 1 closing speech:

‘Tis not due yet; I would be loath to pay him before
his day. What need I be so forward with him that
calls not on me? Well, ’tis no matter; honour pricks
me on. Yea, but how if honour prick me off when I
come on? how then? Can honour set to a leg? no: or
an arm? no…

Both of these are incredibly important and I’m puzzled why they were delivered that way, particularly since it was basically just a voice over while the character in question just sort of… walked around and took in the scenery. There might have been a little showing in their expressions, but not nearly as much as we would have seen if they’d actually spoken the lines and played them out. It’s not as if there aren’t other times where someone talks to themselves for the benefit of the camera – Falstaff’s dastardly scheme to pretend that he killed Hotspur was spoken aloud. So I’m not sure why that was done, and I felt like it really detracted from the play. 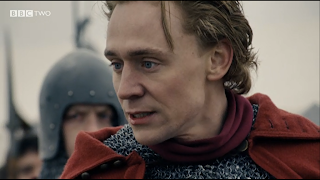 I have very mixed feelings about the battle and the way it was filmed. There was shaky cam in it, which I am beyond tired of but I guess it’ll never go away so I’ll just be a useless curmudgeon about it. But I think during the main part of the battle there was some kind of change on the camera filter… so during the action all of the colors were incredibly muted. This made it harder to tell who might be who – maybe that was the point – but as soon as Hal and Hotspur split off to have their confrontation the colors came back to normal and it just seemed very jarring. I was not a fan of that. There were also people complaining on Twitter that they didn’t feel there were enough people involved in the battle – I didn’t feel like it was too sparse, myself. I just wish I could have seen better what was going on!

These are really the only two complaints I can come up with for the production. I enjoyed it greatly, more than I did Richard II. I’m looking forward to them coming to the US so I can get DVDs. (Though I fear Tom Hiddleston will likely still have to take turns with Kenneth Branagh for Henry V duty. Sorry, Tom. A girl doesn’t forget her first love.)

I’m just incredibly sad I won’t get to watch part 2 on streaming next weekend. I’ll be in Pennsylvania for a field trip, so I expect I’ll be in a quarry, getting eaten alive by bugs when I’d much rather be watching Irons and Hiddleston rule the internet. Hopefully I can sneak a peak at it later.